Next morning, we had to visit the Eiffel as the next day we were flying back to Dusseldorf. The rain played spoiltsport again. It was raining by the time we left the hotel. When we reached,it was pouring. Since S wouldn’t sit in the pram, H held her in one hand and an umbrella in the other. I pushed the pram around soaking in the rain (while also searching for someone selling a raincoat). No raincoat found, and reached the foot of the tower soaking wet. God finally had some mercy on us and the sun came around from behind the clouds.  And so, the mandatory Eiffel tower family pictures were taken. The trip to the summit needed tickets for which there was a long long queue. We decided to chuck the summit tour, and instead spent time sitting there, enjoying the magnificent view.

In the evening, we visited Sacre-coeur, also known as the Sacred Heart Basilica. It is a beautiful Roman Catholic Church built on the top of a hill. At the top, it gives a beautiful view of the city. You can climb up the stairs to the top or take a paid small cable car train. Of course, we took the train ride to the top. The church and the view from the top  was beautiful. The way to the Basilica compound is a small street that is like a climb to the hill. It is dotted with a lot of small and coffee shops and confectioners. We had some of the finest cookies there.

Oh yes, and while going back to the airport, we took a taxi 😉

Some points that stand out for me from this trip-

1) No lifts /platforms in the metro stations – not happening at all, considering it is such a big tourist destination and all.

2) I think Paris has more souvenir shops than people and the tourists combined. I mean, every little space in the city is covered by a shop or a guy selling Eiffel replicas. I got so sick of them during the 3 days that I didn’t buy a single one.

3) Some of the metro stations in the city even have people selling wares on the floor. Pretty much reminded me of Delhi 😉

4) Paris has become more like a tossed salad. You will find fewer French people there,and more of immigrants from Afro Asian countries.

5) We had some of the best French crossiants there.

6) The old world architecture around the main city, with the river Seine flowing through, lends it a very old world look.  Pretty much feels like being in Disneyland with castles all around ! 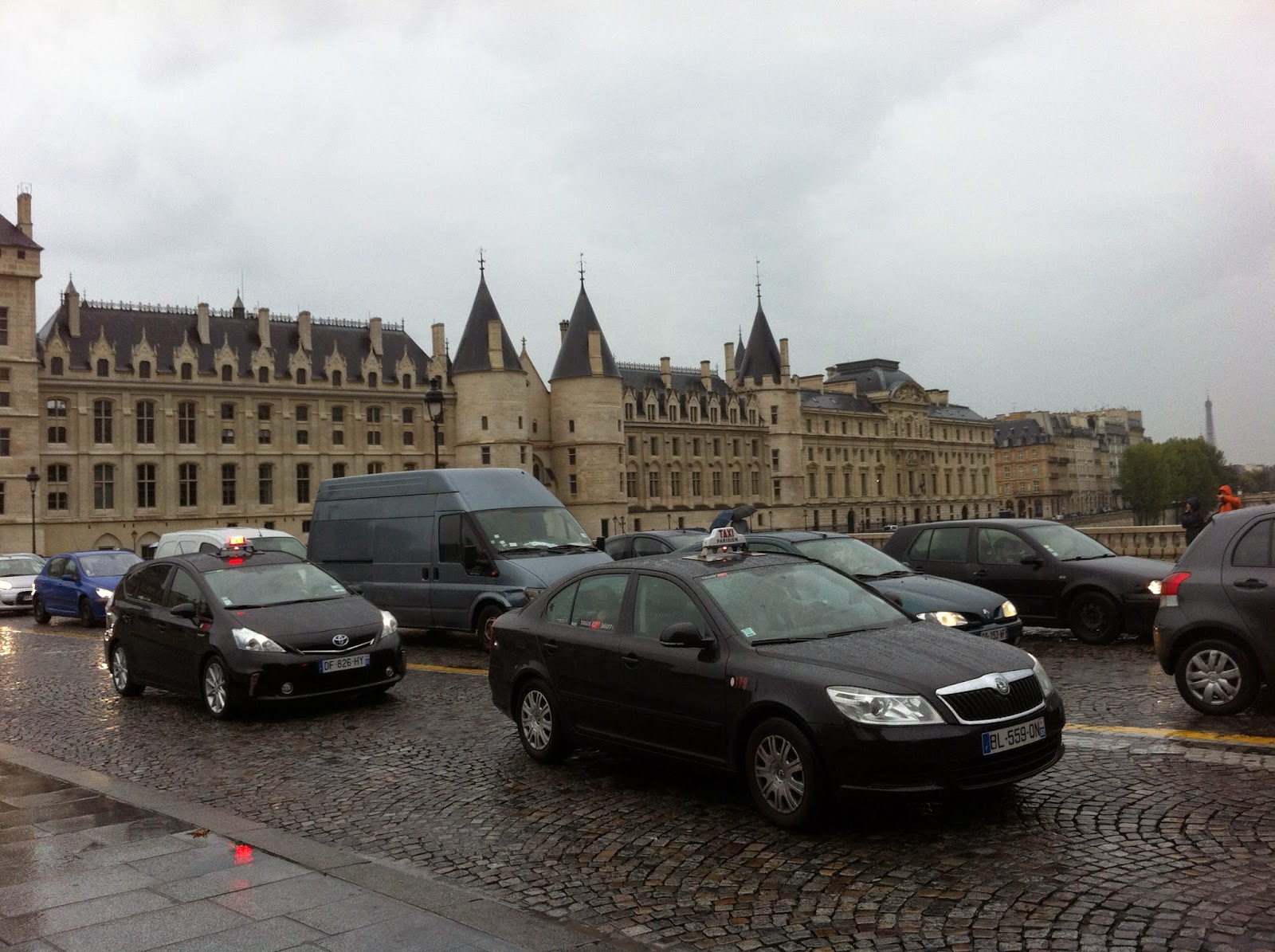 7) Paris, the Fashion Capital! Yes. Almost everyone on the street is carrying a Louis Vitton or Chanel or Fendi. Even if they are rip offs, you cannot really tell.

In all, Paris was an experience. Good or bad, I cannot decide. But something that I will always look back at and laugh about.

The trip to Paris started very uneventfully as we had an afternoon flight. So even though we got up late in the morning, we made it in time to the airport. But that was in no way suggestive of the eventful trip that was to happen.

We reached Paris on time and then began the adventure. The airport was huge and the little one refused to sit in the pram. We tried bribing her with her favorite toys, our beloved phones and as a last resort, to let her eat paper, an activity she enjoys the most! But she had her heart set on standing. So while I carried her, H pushed all our luggage and the empty pram around. After much walking and asking around for directions, we reached the metro station. Here was the surprise. Paris’ metro stations only have stairs and some of them have escalators, albeit very narrow ones. No lifts or platforms for people in wheel chairs or kids in strollers. Since we didn’t know this, we carried our super heavy pram over the stairs thinking that the next metro station might have one. We reached our hotel after changing, mind you, 4 mteros, going up and down their platforms with the pram and luggage and the little one in our arms. It took us one hour from Dusseldorf to Paris, and 2 hours from the airport to the hotel. Needless to say, we were dead tired by the time we reached our hotel.

Then, the room we had booked was not available and we were requested to make do in a smaller room just for the night. At that moment, all we wanted was a place to dump our luggage and the pram 😉 but we should have bargained better. The room was a matchbox. No baby cot. A small bed. We didn’t have the energy to go down till the reception again. So we just crashed. Also crashed were our dreams of visiting the Eiffel tower that evening as the thought of taking the metro again was nothing short of a nightmare.

The next day, with renewed energy,we decided to hit Paris. And then came the rain. The first stop of the day was Mueseum Louvre. The architecture of the building is beautiful. Carvings and sculptures everywhere. The mueseum inside is HUGE. You cannot, by any means cover it in a day. The best way to enjoy it is to choose the galleries you think you’d enjoy and cover those. Art and time management don’t go together 😛

The next stop was the Notre Dame church. It was raining heavily by this time and we reached the church all drenched. I am not much into European history, but the church was beautiful. Please don’t ask me who built it and why!

By the way, in the morning we had travelled by bus and intended to take the same route while going back. But. When we got out of the church, there was a procession going on due to which some streets had been closed. And so we kept walking andwalking ,trying to avoid those streets and reach our bus stand. After a really long walk,we reached our bus stand only to find out that the bus service had been suspended. Great! And so, we walked and walked again,mind you, with a diaper bag, a baby and the pram! We reached the metro station, changed 3 metros and reached the hotel. Phew! The good part of the evening was that our room was ready. It was bigger, had a cot and a king size bed. We crashed again!!