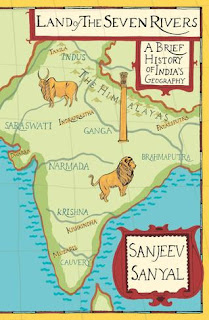 A book that says on it’s cover page that it’s going to talk about the history of your country’s geography is enough to send you a clear signal – either you want to read about it or you don’t. Now I was the worst ever History and Geography student throughout my student life. I could never get the dates right, the innumerable wars, civilizations, and the maps! But history is interesting if you don’t have to sit for an exam at the end of it. And hence, I grabbed with both hands the opportunity of reading this book and making up for my poor knowledge.

Working with a set of questions — Did the great flood of Indian legend actually happen? Why did the Buddha walk to Sarnath to give his first sermon? How did the Europeans map India?
Combining scholarship with sparkling wit, Sanjeev Sanyal sets out to explore  how India’s history was shaped by its geography – answering questions you may have never thought to ask. Moving from geological and genetic origins to present day Gurgaon, Land of seven rivers is riveting, wry and full of surprises.

Land of the seven rivers moves through the Indian sub-continent and along the way are the major landmarks like the Harappan civilization, the Vedas, Ramayna, the Mahabharata and further along the British and the Mughals. The book covers over 6000 years of Indian history about cities, landscapes and its rivers. It tells us about the world before Pangea happened and how India was once very close to Madagascar in Africa. That explains the similarity in the elephants and the genetic code. It also talks about how the various cities came into being, which rivers had flown there, how they were central to the existence of that civilization, how trade routes were created and so on and so forth. It has a lot of information about ancient and medieval India and the book covers historical as well as the geographical parts of it like plate tectonics etc to validate its logic.

I liked the book for it’s never ending information. More so for a historically and geographically challenged person like me. But after a while, the book seemed just like my history text book. Overflowing with dates and names of civilizations and information. When I had read the words “Combining scholarship with sparkling wit”, I had thought may be the book would not be just pure veggies, but a nicely done salad with the thousand island dressing 😉 That was the only thing that was a bit of a disappointment. Otherwise the book is a store house of interesting and (I think) never-before-read geographical aspects of Indian history and vice versa.