The road to reading success can be challenging for some kids. Let these professionally animated games give your child the skills and confidence to meet those challenges head on! Alongside friends like Roly and Muggo, your child will develop reading comprehension skills ranging from sight words and letter knowledge to transition words and story comparisons in an engaging way that will help foster reading independence.

Find all the words and you might just find the treasure at the end of the rainbow! Be sure to check out Education.com for more fun learning activities.

The road to reading success can be challenging for some kids. Let these professionally animated games give your child the skills and confidence to meet those challenges head on! Alongside friends like Roly and Muggo, your child will develop reading comprehension skills ranging from sight words and letter knowledge to transition words and story comparisons in an engaging way that will help foster reading independence.

Do you remember the chaotic time just before our college admissions? I am sure each one of us have lots of stories to tell about that time. There was not much information available online at that time. The only way to know about colleges and their cut offs was either word of mouth or a visit to the college or our newspapers. Everyday was a day of more anxiety and confusion. Would we get past the cut off? If we did, is the college really that good? What is their placement percentage? A ticking clock and tons of unanswered questions.

I recently came to know about this new website Collegedunia.  Pretty much like a education shopping mall. One stop centre for all your college queries. The website was launched last month and provides information of up to 15000 colleges and universities across India. They claim to take that number to 30000 by the end of this year. Good news for all college aspirants out there. 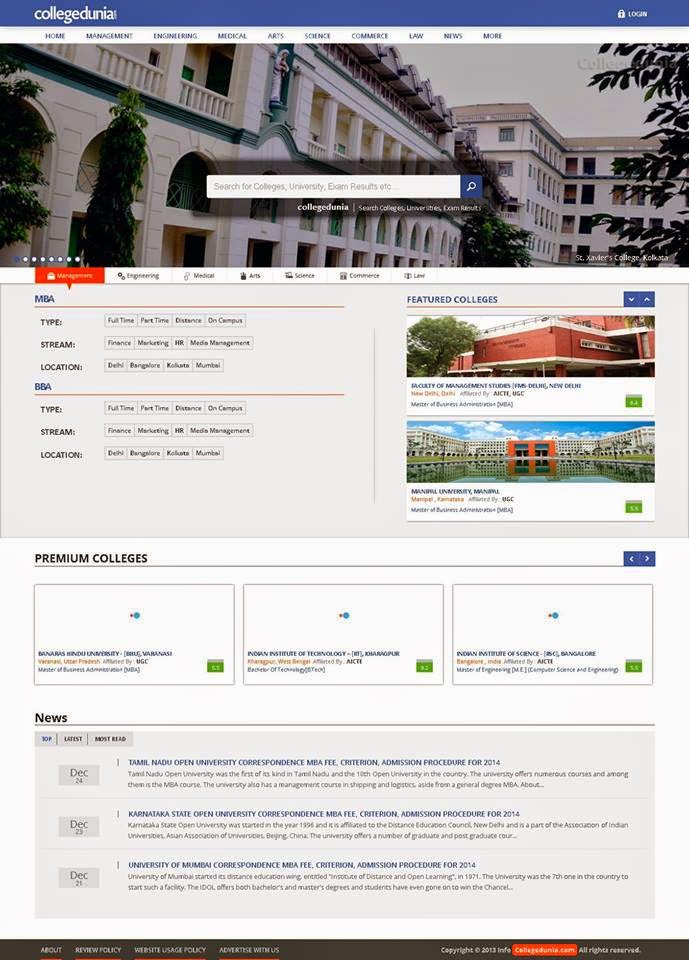 The website is pretty clean in navigation. On the top, you can see all the verticals they provide information about like Engineering, Medical, MBA, Law, Arts, Science etc. Once you select your vertical, you can see a list of all the hundreds of colleges catering to it. You can further boil down to your choice by selecting your preferred city, state and course Information from the left side menu. You can also click on the college to get a lot of details like courses offered, their duration, the fee structure, hostel facilities etc. Phew! I don’t think you would have any questions that this website won’t answer!

Collegedunia looks like a promising upcoming education portal for students and parents alike. You can also follow their blog for latest news on colleges and admission procedures. If you have something to say, do go to the college link and give out a review others can benefit from. If you have nothing to say and are impressed with this information, do share it on your social media. You won’t know who you end up helping!

Recently, I got an opportunity to do something new – attend the press preview of a high profile event in Delhi. You’d ask how. Another perks of being a decent enough blogger! Ah, the spoils 😉

And so, I got this email from the PR team managing the

in New Delhi. At first, I thought this was just a spam email and was about to delete it, but then something just struck and I decided to give it a read. And Thank God for that. It was an email from the PR team asking me to attend the press preview of this week long affair that was to begin on Oct 27 and carry on till Nov 4. A day prior to the inauguration i.e Oct 26 was the press preview.

was sweet enough to come along and give this a shot!

And so we reached the venue a modest half hour late (thanks to the traffic) and didn’t think much of it, since these kind of events hardly start on time. Oh! But it was a face-palm moment. We were ushered in quickly as the event had already started and we quickly joined the rest of the team. But before I tell you what we did or what the agenda was for the day, let me tell you something that was the high point of the day for me (apart from the consideration that I got for being invited to the event exclusively). It was the Press ID card that was issued to us. *Collars up* Call me a show off but it did feel special to be at an event venue a day before it opened for the general public and being briefed about the entire thing.

The Indo German Urban Mela is being held in Delhi to commemorate 60 years of diplomatic relations between India and Germany. Its being held in the Indraprastha Millenium Park, near Sarai Kale Khan. Its a unique blend of technology, science, culture and entertainment. The huge park is divided a into number of pavilions which are basically partitions or areas allotted to each company that are participating there. A lot of big names like Volkswagen, Deutsche Back, BASF, Bosch, Airbus 380 etc are present. What we got to do was something really interesting. Apart from the sneak peek that we got into the cultural events that would happen at the mela, we were given a personalized tour of the mela by the installation artist and designer Markus Heinsdorff himself. There were beautifully designed tents which give a different appearance depending on the time of the day.

We were then taken inside these pavilions to get an idea of what was to follow in the coming days. The companies had some really great ideas on how to make urban lives easier while safeguarding the environment. BASF has designed a special car which has solar panels on the top and runs on sunlight, while the Deutsche bank is supporting a research that has apparently built an aircraft which runs entirely on solar energy. They have even tested a prototype that could survive 2 hours in the air, from Switzerland to France and are trying to find a break through to make it more viable for long distance flights too. The Federal Ministry of Education and Research had a lot of information on the various German universities that you can apply to and for job opportunities. It has a whole lot of information out there for you to grab, understand and make use of.

While I say that, its not all serious stuff. The week long mela has a series of cultural events lined up for you to enjoy like dance and theater workshops and book reading sessions by famous novelists on the last day. We were also invited to participate in the food-tasting ceremony, basically German delicacies  that would be available for the general public after the inaugural the next day. And while I am still gloating, let me also state that the food is managed by none other than Vivanta by Taj. We got to meet their Food Manager as well as their Head Chef! A lot of firsts for me 🙂

It was great fun to be there and very informative too. If you are in Delhi, you MUST visit this. Its a great place to get a lot of ideas and learn, and if nothing else, enjoy German dishes, the Beer Garden, the Rock events and the dance workshops happening live. You seriously got nothing to loose!