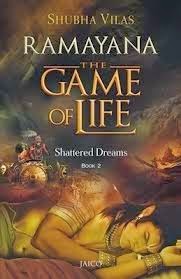 I have never been a fan of the mythological drama genre. SO even though the husband loved the Nagas series, I haven’t read it yet. But sometime back I read a book called the “Palace of Illusions” which dealt with the story of Mahabharata from Draupadi’s point of view. All my knowledge of Mahabharata hitherto had only been from the famous tele-series of the 90s by the same name. But the book had so much more to offer. And that is what got me hooked on. Last year I read Shubha Vilas’ Rise of the Sun Prince. Initially I found it a little slow. Maybe it had something to do with my expectation. I had expected it to be something of a story built around Ramayana, which it was, but in a “motivational speaker” kind of way. It starts with how the Ramayana came into being, about Valmiki and why he was chosen to write it. But with the amount of information that I never had, it had me hooked on in no time.

And when BlogAdda approached me to review the second part of this book, there was no way I was not doing it. The sequel to the book, Shattered Dreams, starts with king Dashratha fighting his inner demons. He decides to relinquish the throne and make his eldest son Rama the new king of Ayodhya. Thereafter starts the story of love, anxiety, betrayal and politics. It feels so much like an everyday story of any Indian household. I think we have the likes of Sumanthra, Kaikeyi, Kausalya, Lakshmana, and Bharatha in our families. The author goes through the stages from Rama’s abhisheka as a king to the time he is sent to the exile. Even though we read a lot of motivational and self healing books, there are various places where the author drives home a point in such a subtle way, using Ramayana and its characters as a backdrop that you would be left wondering how you didn’t figure it yourself. Pretty much like what the Bhagwad Gita preaches. That everything is right before our eyes. We just need to discover it through connecting better with our inner self.

What didn’t work for me in the first few pages of the book, became a strong point for me later. I loved the footnotes at the bottom of each page where the author shared wisdom and analogy about situations that are so similar with our regular life. That how all things that appear godly, have such simple humane traits behind them. And how, it is not the people who are gods, but their learning, manner and character that makes them so.

Let me quote some gems from the book:

– A fasted belly and a fattened ego sometimes reside in the same body!

– Love is not a passive monologue but an action packed movie that ends with pleasing the beloved.

– Damned by despair and buoyed by hope. Isn’t that what life is about? Life is a combination of hope and despair. The one that dominates you, carves your personality.

I have had to read the book in a week in order to facilitate this review. But truth be told, this is one such which should be held longer, like a drink, stirred, and held in the mouth to taste it completely. So hold on to your drinks and enjoy 🙂

This review is a part of the biggest Book ReviewProgram for Indian Bloggers. Participate now to get free books!

177 thoughts on “Book Review : Ramanayana, The Game of Life”