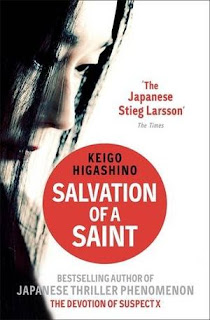 I read a crime thriller after ages. And I desperately wanted this to be a good one. I keep trying to put 2 and 2 together after every clue to figure out the mystery before the truth emerges from the author. And the habit’s so bad that sometimes I do figure it out and then the book fizzles out and suddenly I don’t seem to have enjoyed it all that much! But but. Salvation of a Saint is about a perfect murder (much like the (in)famous Aarushi Talwar murder case) and I bet you can’t figure out what’s happening until the author decides to spill the beans.


When a man is discovered dead by poisoning in his empty home his beautiful wife, Ayane, immediately falls under suspicion. All clues point to Ayane being the logical suspect, but how could she have committed the crime when she was hundreds of miles away? As Tokyo police detective Kusanagi tries to unpick a seemingly unrelated sequence of events he finds himself falling for Ayane. When his judgement becomes dangerously clouded his assistant must call on an old friend for help; it will take a genius to unravel the most spectacular web of deceit they have ever faced…

The book is quite simple in its approach in the beginning that you know by the end of the first chapter who’s going to die and who’s going to kill. But then it sounds too simple to be true. The author of a crime thriller won’t give it away in the first chapter, you’d think. But that’s Keigo Higashino for you. But even though you know the basics, one would want to know how the killer did what he/she did and most importantly, Why? That’s what the book is about. Detective Kusanagi and his assistant Utsumi with the help of a professor friend try to unravel the mystery for you. It’s quite interesting to read in detail how the investigators use each and every minor detail at a crime scene to their advantage. Utsumi’s female intuition has been shown in a quaint yet effective way. The whole camaraderie between the characters is quite affable and yet not over the top.
The book gets unputdownable when the prime suspect has an ironclad alibi, and the investigators discover the victim had another woman in his life. To make matters worse, the “other woman” is carrying his child and is the wife’s close associate. The author dabbles in confusing human emotions and high-end investigation effortlessly and keeps you hooked.
Towards the end, however, I felt the book was a little stretched and I was reading the same things over and over because, probably, the author wanted to delay the climax.
This was my first book by the author Keigo Higashino and I was not disappointed. Rather, I was quite impressed and when I googled him up, I found that his book “The Devotion of Suspect X” is his best work so far. I am definitely picking it up the next time I want to read a real good crime thriller and feel good about it 🙂
My rating 4/5

One thought on “Salvation of a Saint – Book Review”