A few days back, I (for the nth time) got one of those emails which preach you to say your I love You’s when you have still got time. Because sometimes, we get caught up in the frenzy of life and forget to tell our loved ones how much we love them. Ok. Point taken. But recently there have been a lot of similar mails preaching that we shouldn’t be rude to people because that might just be our last meeting. And then we would burn in the hell of guilt because we had been rude to them. Even though we didn’t do anything bad enough to make them die…isn’t it? And that got me thinking, “Was Death the only reason that made us enjoy the vagaries of life?” 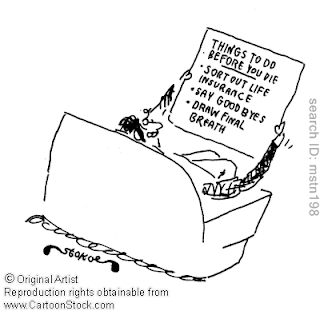 I know we understand happiness because of sadness, love because of pain and other crap like that. But my point is that life itself is such a fascinating thing that even otherwise, we should look forward to living it, and not only because we might just die one day and not get to live another day. And so, just because someone might die, I should be open to taking crap from people? And what if I were to die before the said person? Would that person feel guilty about it too? What a pity if that person doesn’t. Life wasted! And imagine that if everyone to believe this and nobody ever said anything to each other what they really thought, how screwed this world would become. 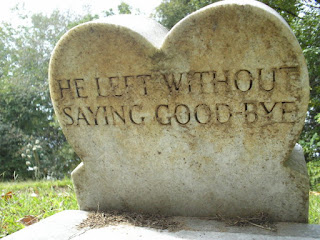 Sample this. I had a fight with H the other day. And soon after I thought about the (stupid) email. And then I thought about whether H would be doing the same. But then he was not the one who initiated the fight. He just responded to what I was saying. That means that this stupid thought came only to me because I was guilty. And then I thought what if I were to die, would H feel guilty too, about making me mad because of which I fought with him. Knowing him, I don’t think so. Aren’t these fights very much a part of our relationship? Wouldn’t H  remember me as much for my love and care, as much he would for my “war”ing skills? 😛

And while I was toying with these stupid ideas in my head, I came across this soap on TV where in the leading lady has brain tumor in last stage (why can’t these TV guys be a little more creative with disease names? Everybody always dies with brain tumor in last stage..boring!) Anyway, so the lady will do supreme sacrifice. She will not tell anyone in the house. (Now how stupid is that! There might be a slim chance of being saved if you start the treatment right away, but then how is she going to display her heroics…eh?­) AND to ensure that her husband doesn’t miss her (read: has somebody to cook and clean and sew buttons on his shirt after she’s gone) she starts hunting a prospective wife for him. Holy crap man! If not for anything else, I might just get brain tumor from watching another episode of this stupid soap.

And so, while I was thinking whether H would feel guilty about my death and after watching the stupid soap, I became stupid too. I thought what if I discovered I had brain tumor in the last stage. And I couldn’t think of what I would do after discovering the ailment, but one thing is for sure. I aint finding no girl for H  😉 I mean seriously, what’s that lady or her kick ass director/writer thinking? They think real people are like that? If it were me, I would make H  take an oath that he should not so much as even think about any other girl, let alone getting hitched to one. Atleast for a year or two. Not that I would want him to be miserable, but I would not want him to be happy either. Behaving as if my presence in his life meant nothing at all! I am selfish that ways you see 😛

I would want him to miss me often and talk to me by looking at the pictures in our wedding album. But not miss me too much to start drinking like a Devdas. If he were to pass by any book shop or road side book stall, he should always stop, remember me and buy a book with a smile on his face. If he were to come across a cute baby, he should think about how I used to go awwww with cute babies and smile again. If he were to come across a really cute outfit in the mall, he should buy it and gift it to those little girls on the road I always feel helpless about. And once he starts dating, he should always make it clear to the “new girl” that I was the first love of his life and that she would just have to deal with it. Hmmph! And so there, I am not so bad. I am basically trying to put a smile on his face ;-))

Now I really have no idea if I am that sadistic but I really had a lot of fun writing out all this. And somewhere in my heart, I realize that death has a comical side too, that makes us behave in such stupid, idiosyncratic ways. So people, just believe whatever you want to and whoever you want to as long as it amuses you, and not because you actually fell prey to somebody’s stupid belief who was most probably guilty as hell while typing out those lines! 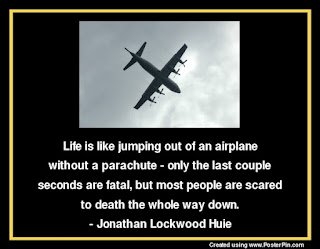