June 15, 2012March 25, 2020
Everything in my life can be divided into two eras – Before I met You and After I Met You. But somehow I can’t recall the time Before I met you. You know why?
Being a huge SRK fan and all his chick lit, romantic and love-is-forever kinda movies, I always thought that the day I was conspired to meet you, I would just know. How? That I never figured out. But alas! Nothing like that happened. You walked in, I saw you, you saw me and we turned away our faces as politely as strangers do after scanning other strangers around them.
That day when the lights went out for our first video test, I turned back to look at something. And you saw my eyes. Only my eyes. And you say that got you hooked. You loved them..large, round, dark brown and moist. I don’t quite believe you to this day 🙂
One day I was reading one of my favorite books when you came up to me and asked if you could borrow the book. And that day we spoke for the first time. And now I realize that it’s only poetic justice that a book brought us together. Our mutual love for books has indeed bought us a long way.
And then a creep started making my life difficult by almost stalking me. I was afraid to venture out of that room. And coincidentally (?) you were the only guy left. I asked you  to walk with me till the gate without telling you the reason. You were quite amused by my antics, but you still decided to come along. And scare away the creep you did, by walking me safely till my cab every day. You really felt protective of me since then? *gulp*
And then one day when I was telling you some random stuff, your expression changed to something that was akin to spotting your beloved mango on an apple tree. You couldn’t have been more surprised. And then you opened your blog and showed me an article that you had written that was almost exactly what I was telling you. How that happened to two complete strangers, I don’t know. But today, it makes my belief stronger that you and I were conspired to be together.
And then we began to hang out together in a group. Everybody thought there was something between us. Except you and I. Although they did make lot of jokes about a tall handsome 6 footer dating a shy kid-like 5 footer.
Do you remember that truth and dare game we played once? Where we all had to write on paper chits,  who we would like to go out on a date with, from that room? And to the amazement of everybody present, you and I were the only people to have written each other’s names. And imagine that we still didn’t see any signs (as SRK says) 😛
It was time for you to leave the organization. I was sad. But I didn’t cry. Why would I? After all we had been friends for only about 3 months. And nothing magical like “kuch kuch hota hai” had happened between us. But after a few days, I missed you way more than I should have missed a 3 month old friend. I cried and I sobbed and yet I tried to talk to you normally because I wasn’t even sure what this was all about. It was so crazy that I never figured it could be that four letter word that everyone had been saying all along. I never believed my SRK fantasy could ever come true.
And then it was time for me to leave. To another city. Now this was serious business. When you left the org, at least we were in the same city and could have met if we wanted to. Moving to different cities would make things ever so complicated. We decided to meet for the one last time. Because the future was so uncertain, who knew what the next six months would bring for you and me? May be you would move to another city too, like me. And then maybe we would fondly remember each other as “that sweet/crazy” friend of mine.
But you decided to make the move. You gave me my first love letter. And then there is this another hilarious story of how I accepted and more importantly, understood it. (may be I will do another post on it later). And you also gave me the best gift that you have given me till date – a copy of my all time favorite book that I had lost. If not for any other reason, I would have said my “Yes” only for this 😛 :-)) 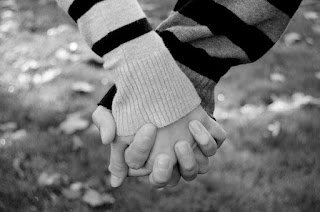 Remember the rules of our relationship we laid down on that day? And now I realize how mature we both were even at the start of our relationship:-) And even though, those rules were so cute, they held us in good stead until we figured out this relationship was for keeps.
And some five odd years later, nothing has changed. My heart still skips a beat when you call me by those stupid nick names that only you and I know. I still get goose bumps when you give me that SRK waala long hard stare, that gaze which bores into my eyes, and touches my soul. You still pamper me with your crazy surprise gifts. You get so mad when I fall ill and I can see you struggle helplessly because you can’t ease my pain. You travel  more than 4 hours every day so that I can reach home safe and sound before dark. You can read my silence. You can still make me do a full throated laughter with your silly antics and jokes. You make me laugh even when I am crying. And the best time is when you cradle me into your arms like a baby and soothe me while I shed copious tears or generally become a bundle of nerves. You always keep me on my toes by just being yourself. I even cherish the time that we spend fighting with each other, because it is spent with you.
Now you know why I worry endlessly about you? Why you mean the world to me? Why I keep telling you to always take extra care and not be your over-adventurous self? Why I shout at you, even though what I really want is to hug you tight and say, “Thank God you are safe!”?
Why I keep saying that you are the one I want to annoy the rest of my life? And may be in my next life too?
I hope, now you know why 🙂