You might have seen lots of gangster movies, action movies, movies with an impressive story line, but you haven’t seen it all till you have seen this one. Welcome to the Gangs of Wasseypur! 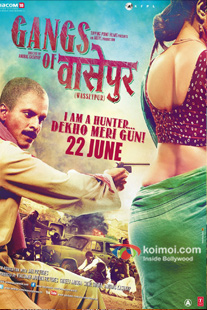 The film is set in the small village of Wasseypur, a part of Dhanbad. The movie begins from the pre Independence era when the Dhanbad coal mines were owned by the English and how post independence, there is a lot of blood bath and gore when the Muslims of the area began to take illegal ownership of coal mines, and thereby begins a feud between the Qureshis and Khans that is still raging on. These are men with a purpose, who make their own laws and then break them. For them, it’s a matter of survival in the lawless land of Wasseypur. If you have the balls to stand up for your rights, you might have a shot of carving out something for yourself, otherwise the merciless feudal lords of Wasseypur will continue to walk over the dead bodies of men and animals alike. The moral conscience in these men is quite constipated!


Talking about the actors in the movie, each one of them is so much in the skin of their character, that for 3.5 hours, you will just be in Wasseypur, seeing their life through their eyes, instead of feeling like sitting in an air conditioned multiplex. Each one of the 370 member crew seems to have left behind themselves and walked forward in their character’s shoes. Manoj Bajpai takes the cake as Sardar Khan, who is ambitious, greedy for power and sex and grown up with the aim of avenging his father’s death at the hands of his master, and the now MLA of Wasseypur, Ramadhir Singh, played very efficiently by Tigmanshu Dhulia. Sardar Khan’s wife, played by Richa Chadda is intelligent, clever and plays the role of a wife and village woman to the T. There are some hilarious scenes when she catches her husband whoring around while she’s carrying his child around and douses him with the choicest abuses. But as she keeps getting pregnant, and realizes that it’s almost impossible to stop her husband from his philandering ways, she tells him very tongue-in-cheek, “acche se khaana khaao, bahar jaake beizzati mat karvana”. (Eat properly, don’t disgrace us outside home). The maverick writer, director, producer Anurag Kashyap has managed to capture every nuance of an emotion that you could hope to find in a lawless land, amid local mafia, that goes on in a couple’s life, as if everything in their world was perfect!


Sardar Khan’s second wife played by Reemma Sen is quite a bombshell too. The scenes where Manoj is trying to seduce her are hilarious. Piyush Mishra plays Sardar Khan’s uncle, and belts out a very restrained performance as his mentor. He also does a voice over and helps the story move forward in decades. The scenes between Sardar Khan’s son, played by Nawazuddin Siddiqi and Huma Qureshi are a classic lot again! You will laugh your guts out!


There is no faaltu Bollywood-typical naach gaana in the movie. And yet the songs are a hit. There is the popular “Jiya Ho Bihar Ke Laala” , “Hunter” and “O Womaniya” with their awesome lyrics, but the best of them all is “Teri Keh Ke Lunga” which I am sure is going to be as cult as “Kitne aadmi they?”


There is such an inherent style in the movie, even though everything in the movie is as Bihari as it can get! For me, this is one movie that is going to be a very prominent landmark in the history of Indian cinema for a perfect film – brilliant storytelling, superb acting by the entire cast, songs that suit the movie and take the movie forward and for the perfect capture of a gamut of emotions. For me, the movie definitely has a style akin to James Bond of Hollywood, that makes people go ooh and aah, and something that is legendary and will be remembered for years to come.


This movie is an artistic kick for people who love the kind of cinema that focuses on performance, rather than the frills. If that’s not your genre, you’d rather give this one a miss. Otherwise, miss this movie at your own risk!

5 thoughts on “The ‘Gangs of Wasseypur’ packs a punch !!”