August 3, 2011March 25, 2020
First things first. Happy Teej to the all the lovely ladies around. And the guys reading this can wish their mothers, sisters, wives and girlfriends.
I got my hands henna-ed (:-P) and it turned out to be b-e-a-u-t-i-f-u-l. Take a look at this. 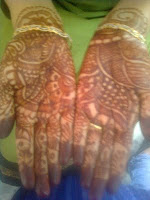 Click on the pictures to view in full screen 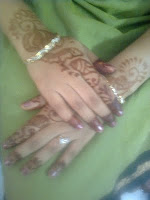 Now, the guy who put the mehendi for me was different from the rest of his lot. Not only was he superbly talented in the work that he was doing, he was charting his course towards a great career as well. I just happened to get talking to him about his earnings on special days like Teej, Karvachauth etc. It was then that he told me that applying mehendi was only his hobby and a means of earning some pocket money. He was actually pursuing a course in Web Designing and 3D animation from a very reputed institute. I asked him about the course fee, which was close to 4L. I was taken aback for a second because I knew, by no means, his father was capable of paying that amount for him. He told me he had taken a study loan and was looking forward to landing a job in an MNC, once the course got over.
I was so pleased to hear his story. It felt like, finally the efforts of the government and a few good samaritans who are spreading the importance of education in the country, is finally paying off. This guy was so upbeat about his education and his future. Not for a second did I see any hesitation or a wrinkled forhead even when he was talking about his huge education loan. He was super confident about his abilities as well his choices. He whole attitude spelt Success. I could visualise a shining India at the horizon. Not too far away.
I wish we have more of such enlightened and self motivated individuals across the length and breadth of the country. One educated person can change the future of multiple generations. I wish success to all those who are trying hard to cut through the glass ceiling. And kudos to every single individual who is spreading the message of importance of education.
And a heartfelt request to all you lucky people (who didn’t have to try too hard for your basic education): do your bit for the society.
As they say, “An investment in knowledge pays the best interest”.